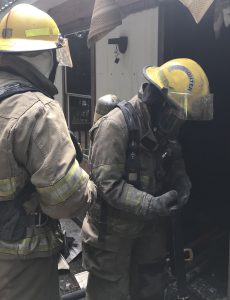 On Monday, August 20th, 2018, fire fighters from Coble Fire Department responded to a report of a mobile home on fire on Highway 438 just after noon. Nine volunteer firefighters and emergency medical responders from the Coble Fire Department responded to the call within minutes of the call going out. Additional resources also assisted including Centerville Fire Department, Hickman County EMS, and the Hickman County Rescue Squad. Coble’s fire engine arrived on scene initially and found that the trailer was, in fact, on fire and spreading rapidly. The fire was quickly put out with no loss of life or injury.